One of the awesome things we get to do as a Belhaven Innovation Award winner is to brew a new beer with them! We had a great day today getting a tour of the place, and discussing ideas of how we can collaborate. We also and sampled every. single. beer. *Hic

As our band’s CAMRA member, LB was in her element, but unfortunately was very adamant that taste comes before glitter in our new brew. We’re hoping it’ll be available in pubs next summer. Watch this space and follow the hashtag #BelhavenBrews on the socials for more info

Last night we opened for the mighty Elephant Sessions to a packed out crowd at The Garage in Glasgow. What a gig! We united for the encore, yahooo!

And just to top it off, tonight Aileen, Laura W and Fiona provided strings for the one and only Lewis Capaldi at the BBC Sports Personality of the year awards. Some weekend?!

We were so humbled and honoured to have been nominated in the Belhaven Bursary for Innovation category this year.It was a list full of absolute kings and queens, well deserving of the award.To say we are shocked (and slightly hungover) from winning the award last night is an understatement. THANK YOU, for this incredible opportunity, recognition, and support

A big high five to all the winners, nominees, performers, organisers and voters for being absolutely quality

An extra special high five to our superstar power queen herself, Jenn Butterworth, for winning Musician of the Year. We are so, so proud of her and couldn’t agree more with all who voted

Hiya folks! We’ve got a new video for you! 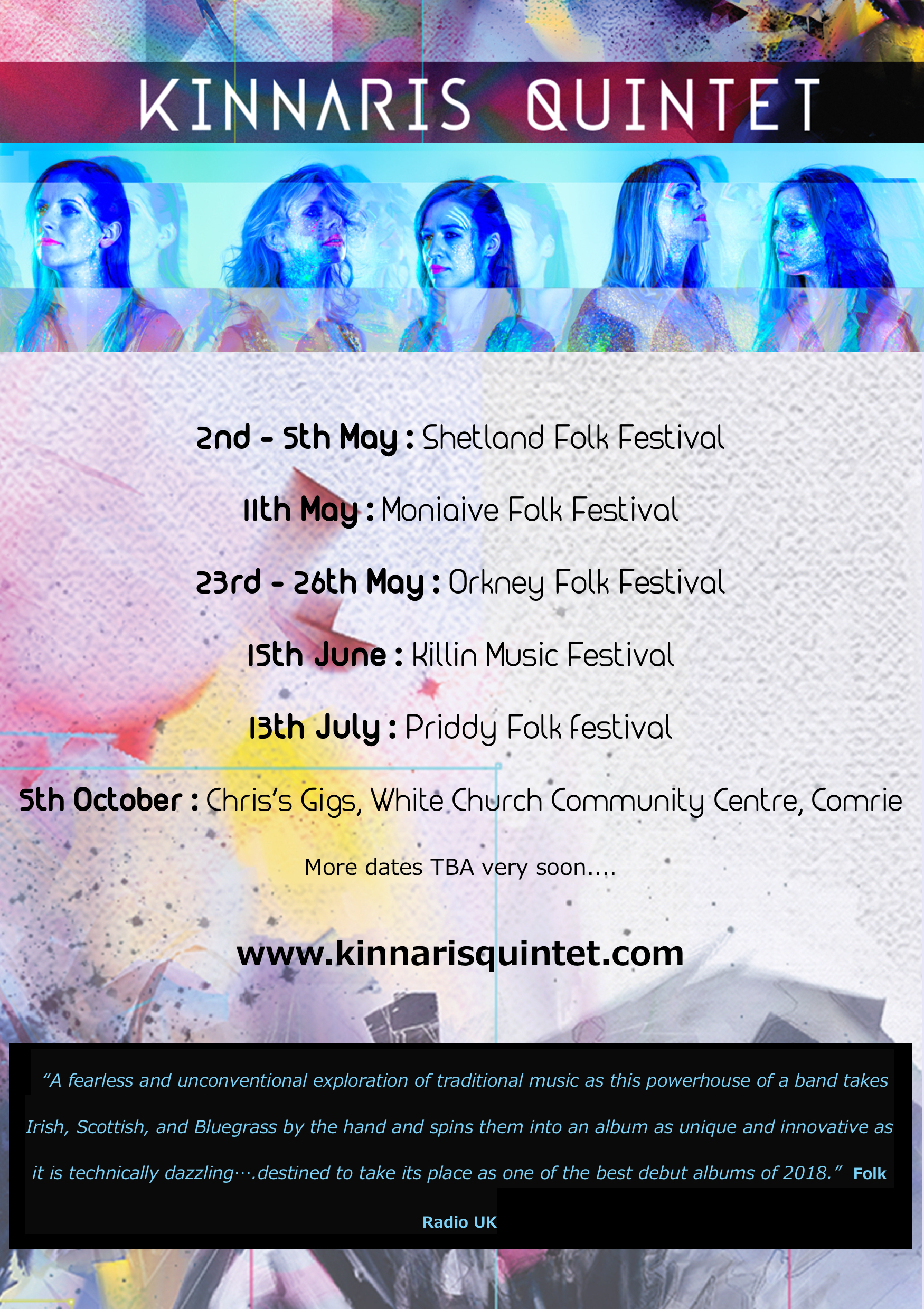 The Close Sessions have made a lovely new video for us! It is recorded live from the stairwell of a Glasgow close, the very close where we first met up and shared music! The tunes are Gortavale Rock by Cathal Hayden & Seán Óg Graham and The Road to Poynton by Rob Harbron. Subscribe to The Close Sessions YouTube channel to hear more great acts.

Celtic Connections has launched its program and we’re so happy to announce that we’ll be playing before the mighty Shooglenifty at the Barrowland Ballroom on the 25th January. It’ll be our first Glasgow gig since we launched our debut album, so if you’re up for joining us for a bit of party then get your tickets here – https://www.celticconnections.com/events/Pages/event.aspx?event=1/shooglenifty-and-kinnaris-quintet

Our fiddle players will be doing a double shift as they are also guesting with Niteworks the following night!

AND it is a Kinnaris Quintet track that is the backing for this years Celtic Connections official promo video. YAASSSSS!

We’re so happy with these lovely reviews;

Folk Radio UK  “A fearless and unconventional exploration of traditional music as this powerhouse of a band takes Irish, Scottish, and Bluegrass by the hand and spins them into an album as unique and innovative as it is technically dazzling….destined to take its place as one of the best debut albums of 2018.”

The National  “The elation of the musicians at being able to play together is always in evidence and that joyous exuberance is captured perfectly.”

The Herald “…a great example of musicians moving the tradition forward while showing, …… sure appreciation of where it all begins.”

Scottish Field Magazine  ” There is a unity in this band that is rare and their music audibly encompasses all the attributes of their mythological namesake, Kinnaris, a creature renowned for art, song and dance that symbolises grace and accomplishment.”

Thanks so much to everyone who pre-ordered a copy and for all of your kind words. We’ll be posting up some of the reviews soon, but in the meantime, if you don;thave a copy yet, you can check out the tracks on our BandCamp page below.

We’ll be celebrating by having tunes and Sangria over at La Bodega Tapas bar tonight, so please feel free to join the party!

A big thanks to Jonny Jobson and The National newspaper for this wonderful article.

And so it proves with Kinnaris Quintet’s debut album, Free One. One of the most anticipated releases in years, Free One sees five supremely talented women – Jenn Butterworth, Laura-Beth Salter, Aileen Reid Gobbi, Fiona MacAskill and Laura Wilkie – give full expression to their musicality, unburdened by thoughts of what should be done but instead allowing the tunes to flow through them unconstrained.

It is a spectacular debut but one which, explains Gobbi, came about almost by chance.

She says: “We were all pals and had been playing music with each other at sessions and seeing each other at gigs and the like but it wasn’t until I felt the need for some sort of creative outlet that I gave the girls a shout and they came round to my flat and we just started jamming.”

From that first session came Saltspring Overture, one of the sets on the album. “We’d heard that tune being played at sessions so we just sat with some prosecco and gin and started playing and it just happened. It was so natural,” Gobbi says. “We didn’t set out to sound like anything or to not sound like anything. We just literally sat and played about.

“There was also a kind of unspoken thing that since we had so many strings [Gobbi on five-string fiddle, Wilkie and MacAskill on fiddle, Salter on mandolin and Butterworth on guitar] that we thought ‘let’s use them all rather than all playing in unison’. There’s a beauty in the regimented nature of instruments in unison but there’s also a beauty when they’re all used to their full potential. You can have so many harmonies and chords going on.

“They can go low and can go high or in the middle but they don’t all have to be playing the same thing.

“We don’t ever sit and score things. It’s never like that. It’s always improvised. So basically if it’s cool we’ll stick with it, if it’s not then we’ll bin it.”

This improvised, free approach is evident across the album. The fact that all five women are from different traditional backgrounds – including bluegrass and Irish folk – allows the band to meld a variety of influences. And recording the album live also helps capture the raw energy of the music.

“We didn’t want anything that was too slick,” explains Gobbi. “We kind of believed in ourselves and we had loads of encouragement from peers and people around us so we just thought let’s do it as live in a studio.

“It was beautiful to do that in the studio. Everything was played from start to end. There was no taking bits out and moving them around.”

The results are stunning. From the opener, Nonna Pina/Space Ghettos to the beautiful melancholy of June’s Garden/Pockets, this is a debut that delivers.

The elation of the musicians at being able to play together is always in evidence and that joyous exuberance is captured perfectly.

“It is so rewarding working with these musicians,” Gobbi adds. “I still well up when we’re playing. Like Free One, which is the final track on the album and which I wrote. Every time we play it I have to close my eyes and almost pinch myself.

“To be with these four incredible musicians, playing their tunes and having them play my tunes and it’s still so heartfelt is incredible. It’s so special and beautiful.

“Often we come off stage with blisters – not from trying to impress each other or the audience – but just because we’re so into the music.”

This rawness is captured on the album. You can feel its power as the strings soar and can sense the artists losing themselves in the music. However, even for musicians a talented as these, there have been moments when the realisation of what they were looking to achieve led to nagging self-doubt.

“I remember looking at the Creative Scotland funding application before sending it off and then receiving word back that we’d been successful and I was in tears,” Gobbi says. “It was such a massive moment for me.

“It’s so easy to get sucked into a world of self-doubt and having that validation from outwith the folk world was important.”

Gobbi, who was brought up in the Irish tradition in Glasgow, need not have worried. Free One is as assured and exciting a debut as can be imagined.

There will be many words written about Kinnaris Quintet that will focus on their gender, and that is understandable and, at a time when female traditional musicians are finally beginning to be seen as the equal of their male peers, important. However, their gender may be one of the least interesting things about them.

It’s true that their visibility will help and encourage many more women but the really fascinating things about Kinnaris Quintet are their talent, their musicality, their approach to that musicality, and their determination to remain committed to musical freedom.

They are truly the free ones.